St George’s Hall Charitable Trust is an independent board of members, who dedicate their own time to protect, preserve and enhance our Grade I listed building.

Our Trustees raise funds through various events and campaigns (in 2016, they commissioned Craven Dunnill Jackfield Ltd to restore a Minton tile roundel on the perimeter of our famous floor, while they have welcomed speakers such as David Olusoga, Lucy Worsley and Michael Heseltine in recent years).

Their latest mission is to create and install a statue of health pioneer, Mary Seacole, in our Great Hall. Scroll down to find out more about the campaign.

The initial idea of the Hall was conceived by Liverpool citizens, who wanted a space for the city’s triennial music festivals. During this same period, a venue was being sought for the Civil and Crown Courts and it was decided that architect, Harvey Lonsdale Elmes, would design one building to serve all needs. 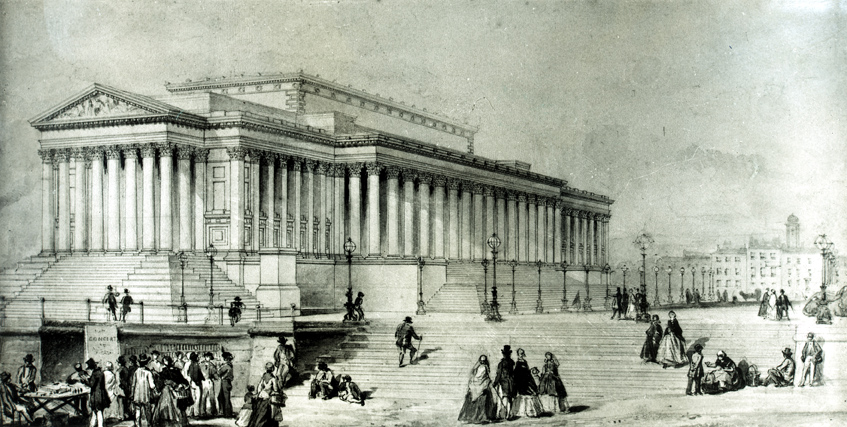 Eventually opening in 1854, St George’s Hall is a unique venue in concept and design, and has undoubtedly become a barometer of the city’s status; having been introduced by the Victorians as an ostentatious display of architecture when Liverpool was thriving, the Hall dazzled locals and visitors until harder times hit the city during the 1980s, when it fell into a state of disrepair and lay derelict for over two decades.

Following a £23m restoration project, the Hall was reopened on St George’s Day in 2007 by Prince Charles, and has become a grand focal point for cultural, community, civic, corporate and performing arts activities once again.

More importantly though, the Hall has sealed its status as the emotional heart of Liverpool, where memorable moments of the city’s life converge; from commemorative Remembrance Services and vigils, to celebratory occasions such as Liverpool Pride marches and The People’s Opening for European Capital of Culture back in 2008. 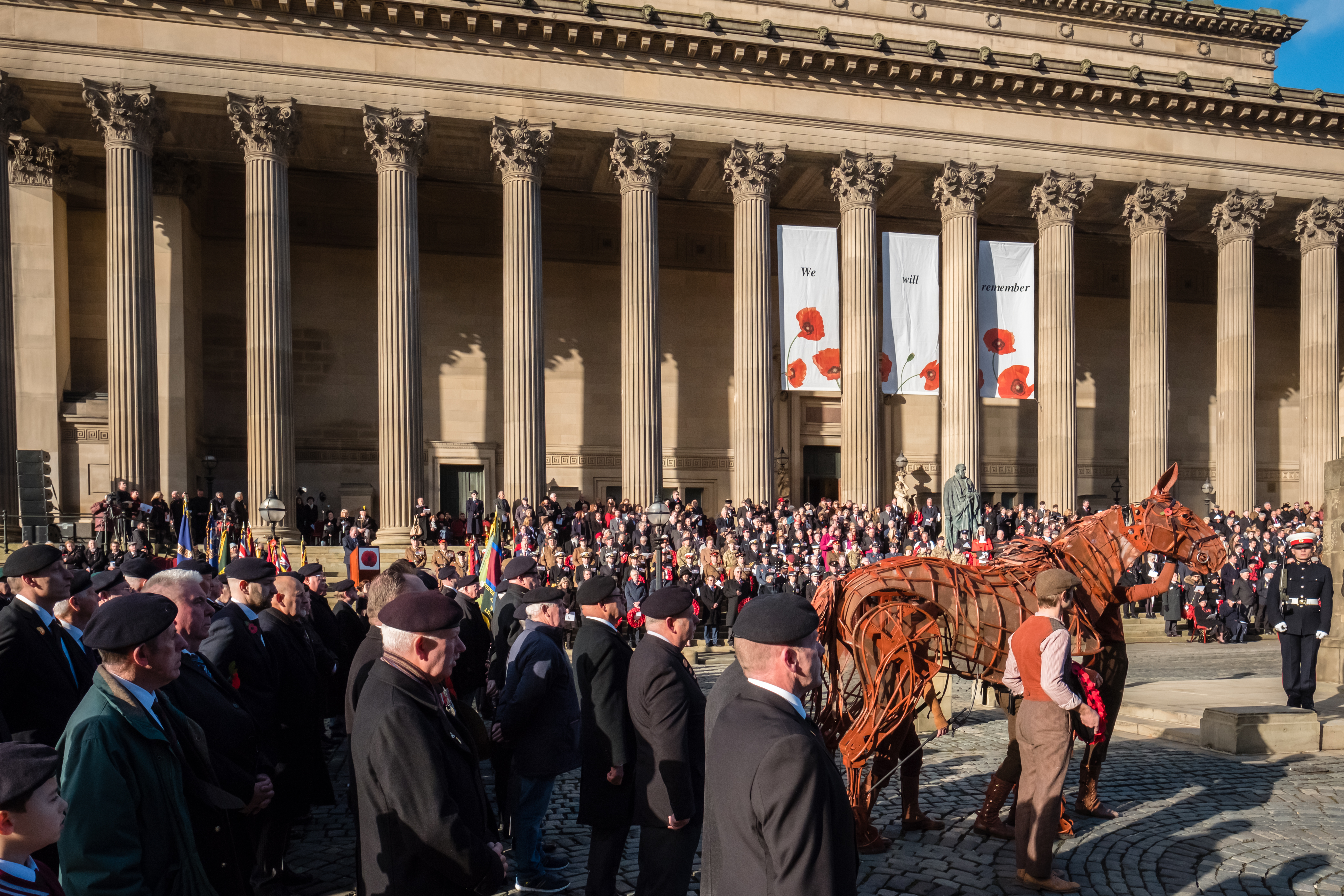 Joey, star of theatre production, War Horse, takes part in Liverpool’s Service of Remembrance in 2017, during a poignant moment on St George’s Plateau.

A donation to St George’s Hall Charitable Trust supports the conservation and restoration of the Hall, creating more memorable moments for visitors and residents of Liverpool. You can become part of the story by making a donation to the Trust via the button below. 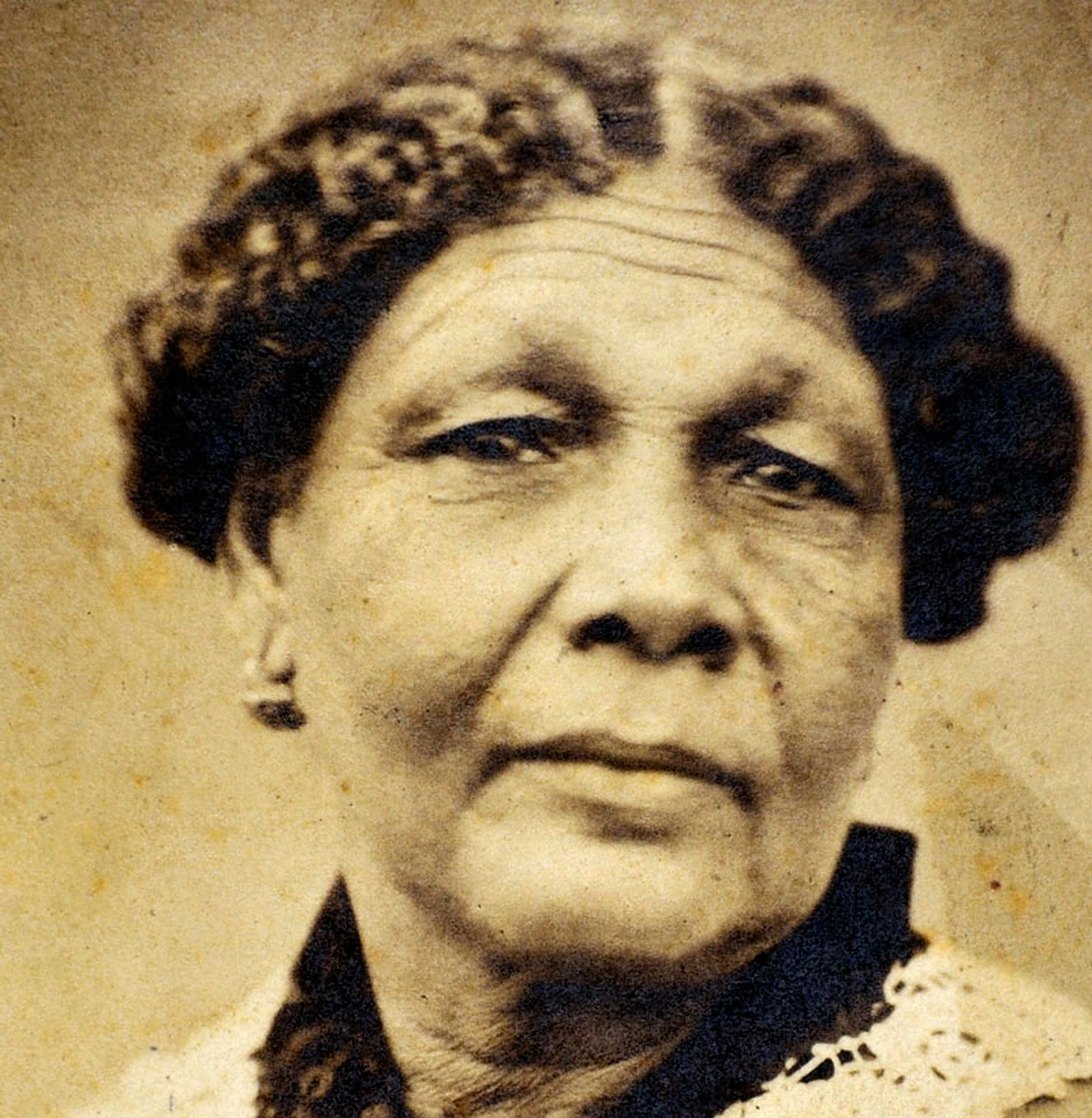 St George’s Hall Charitable Trust is on a mission to create and install a statue of health pioneer, Mary Jane Seacole (1805-1881). Mary was voted the greatest black Briton in 2004 and the Trust believes that her outstanding achievements, as an influential black woman, a nurse, businesswoman and healer, deserve an enduring testament to our respect and recognition.

Our mission began with a call-out for sculptors, closing on 30 April 2021. A long list of applicants will be reviewed by a panel of Trustees, academics and heritage officers – as soon as we have an update on this, we’ll keep you posted.

To find out more about the campaign, read the Trust’s brochure via the button below. You can also become part of our story and help us to create history by donating. All contributions – no matter how big or small – will help us on our mission to put a statue of Mary in St George’s Hall. 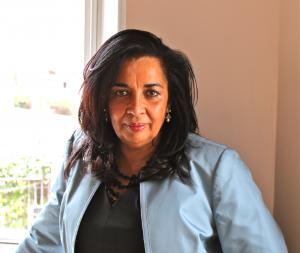 Chair of the St George’s Hall Charitable Trust, Claire Dove OBE DL, has been a key player in the education and social enterprise movement since the 1980s.

Ex-Chair and current patron of Social Enterprise UK – the national umbrella group for the social enterprise movement in the UK – Claire has worked in a number of key roles over the last three decades.

As chief executive of the Blackburne House Group, which is recognised as one of the leading providers of adult and community education in the country and graded ‘Outstanding’ by Ofsted, Claire continues to work tirelessly with the group.

Claire has also been instrumental in creating the strategies for the social enterprise movement in the UK and working with British Council across the globe. Claire acts as an intermediary between government and the voluntary sector to champion the Social Value Act in the UK, which ensures that social and environmental inclusion is embedded into the procurement of contracts for the public sector. 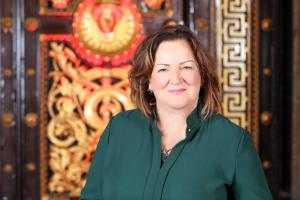 Vice-Chair of St George’s Hall Charitable Trust, Jayne’s advocacy of the Hall is key in ensuring its sustainability and a strong connection to the community that it serves. Jayne is also governor of Merseycare NHS Mental Health Trust and is well-known for her direct and approachable manner, with a reputation for creating lasting positive change.

Jayne is managing director of Jayne Moore Media, the multimedia communications agency which manages the reputation of brands such as Albert Dock, Liverpool BID Company and the ADHD Foundation.

Jayne’s work on St George’s Hall Charitable Trust has involved promoting and preserving the cultural assets of the iconic Grade I listed Hall, a role in which she has excelled over the last five years.

Appointed as a member of the St George’s Hall Charitable Trust in May 2010, Deputy Mayor Wendy Simon has 37 years of experience working in the local government. Wendy has represented the Kensington and Fairfield Ward on Liverpool City Council for over a decade.

Helping to manage Liverpool’s proud cultural legacy, Wendy has overseen a multi-million pound regeneration in the city, with her expertise helping sports facilities in particular. 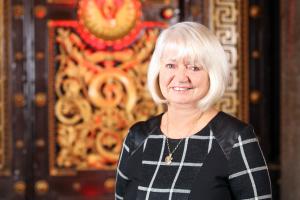 Sylvia Lewis BEM (British Empire Medal) has been a Trustee at St George’s Hall since 2012. Her experience in fundraising is seen as a vital contribution to the work of the Trust, helping to organise and facilitate a number of events at the Hall.

Sylvia originally trained at Walton Hospital, gaining her RGN before moving to Alder Hey to commence her Children’s training. Sylvia also gained her midwifery at Walton and LMH, finally settling as a community midwife in Rainhill. Her claim to fame is delivering over 2,000 babies.

During her fundraising for Macmillan Cancer Relief, she raised over £2 million putting into place over more than 40 Macmillan nurses for Merseyside and Cheshire. Sylvia is also co-founder of the Ronald McDonald House at Alder Hey Children’s Hospital in Liverpool.

Sylvia has also been an active member of the Lord Mayor of Liverpool’s Charity Committee for over 10 years. 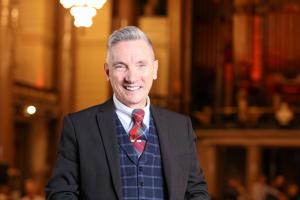 Gary Millar has worked towards securing the preservation, development and improvement of St George’s Hall since May 2008. Gary has played a huge part in publicising the historical and architectural importance of St George’s Hall in the City of Liverpool.

The Lord Mayor of Liverpool in 2013, Gary has won six individual awards during his career, including the Liverpool Echo Enterprise Champion. He is also the designer of Parr Street Hotel and a fundraiser for veterans and those in need. 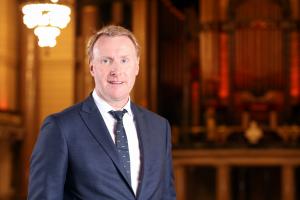 A Trustee at St George’s Hall since December 2017, Dr Steve Powell studied medicine at the University of Dundee, and following his junior doctor years embarked on a 10-year career as a consultant interventional radiologist at the Royal Liverpool Hospital.

Following a transition through healthcare management roles, Steve was recently appointed chief diagnostic officer of Rutherford Diagnostics, a company passionate about changing healthcare outcomes in Liverpool and beyond. Away from work, Steve lives in Wirral with his wife of more than 20 years and their three children.

With an extensive network developed during a career which included directing the Liverpool Life Sciences Accelerator, he is currently involved in showcasing St George’s Hall’s unique heritage to a worldwide audience. 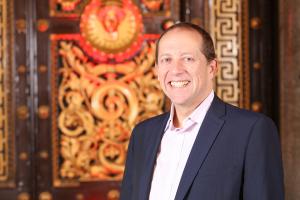 A Trustee at St George’s Hall since December 2017, managing director of Speke-based Steven Hunt & Associates, Steve Hunt has run his own business for the past 29 years.

As well as managing a team of 20 employees and winning new business across the country, Steve is currently the honorary secretary of the CIBSE Merseyside and North Wales region, having previously been chair.

You can support the conservation and restoration of St George’s Hall by making a donation to the Trust via the button below. Your donation will help to preserve, protect and enhance the Grade I listed status of the Hall.

Preservation of your privacy is important to the Trust and we are committed to letting you know how we use your personal information and to making only responsible use of your data.

We will collect personal information from you when you or your organisation enquire about our activities or make a donation to the Trust. This may include your name, title, email address, correspondence address, telephone numbers. We may also ask for some additional, non-personal information.

2.1   Your personal information will only be used to process your donation or enquiry, to thank you for any donation you make and to provide you with information relating to the activities of the Trust which we think you may be interested in.

We will take reasonable precautions to prevent the loss, misuse or alteration of information you give us.

Communications in connection may be sent by e-mail. For ease of use and compatibility, communications (other than payments where applicable) will not be sent in an encrypted form unless you require it and provide the certification to enable us to communicate with you in that way. E-mail unless encrypted is not a fully secure means of communication. Whilst we endeavour to keep our systems and communications protected against viruses and other harmful effects we cannot bear responsibility for all communications being virus-free.

If cookies are used they will only be used to assist the purposes set out in this privacy policy, but cookies will not be used if we do not consider them to be necessary.