Posted on 15th November 2019 by CommonAsh 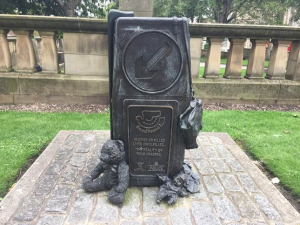 The names of people from Merseyside and beyond who lost their lives in road crashes will be read aloud as part of a special service of remembrance in Liverpool this weekend.

Sunday 17 November marks the World Day of Remembrance for Road Traffic Victims. The Liverpool service will form part of the commemorations and will be held in the Concert Room at St George’s Hall.

Following the service, five doves will be released at the memorial to road crash victims in St John’s Gardens to signify the five people who are killed on our country’s roads each day.

Organised by the national charity for road crash victims, RoadPeace, the day of remembrance is a chance to reflect on the lives lost, as well as the effects such tragedies have on families and friends.

The event is organised locally by Pauline Fielding from Liverpool. Pauline, who is a RoadPeace trustee, lost her son Andrew in 1994 at the age of 18 in a crash caused by a driver who fled the scene and has never been traced.

The Service of Remembrance for Road Crash Victims takes place at The Concert Room, St George’s Hall, at 2pm on Sunday 17 November. The dove release and photo-opportunity will take place at 3pm.

Liverpool event organiser Pauline Fielding said: “Crashes on our roads claim the lives of our loved ones and leave a trail of devastation in their wake. The victims are in our thoughts every day and each year we join together to honour their memory with the service of remembrance.

“It keeps their memory alive and is a constant reminder to everyone that our roads are dangerous places where there is an unacceptably high death toll due to dangerous driving.

“We invite everyone to attend our service and pay tribute to those who have been lost. We want people to spread the message that many of these deaths could have been prevented.”

Mayor of Liverpool Cllr Anna Rothery said: “When it comes to keeping people safe on our roads, we all have a part to play by giving the road our full attention whether we are a motorist or a pedestrian. The service of remembrance offers us the chance to count the human cost of such carelessness and reaffirm our commitment to doing all we can to eradicate deaths on our roads. It is an honour for me to attend the event and illustrates how we as a city stand in solidarity with those who are left behind.”

Merseyside’s Police Commissioner Jane Kennedy said: “Every death or serious injury on the roads of Merseyside is one too many. Each and every one brings suffering and misery to those who are involved, their families, friends, and the wider community. They also have a profound effect on those working within our emergency services who are called upon to provide help.

“This poignant service gives us the opportunity to remember all those who have tragically lost their lives and offer support to their loved ones, as RoadPeace does all year round. It also gives us the chance to say thanks to the blue light workers who go to their aid and reflect on what can be done to prevent further tragedies.”